The pulsating rhythms of nightclub culture, from Hip Hop to Punk, with roots in Disco, Cuban Salsa and the high voltage mood of celebrity V.I.P. rooms, sets Peruffo’s Club collection on the dance floor.

The classic “gourmette” or curb chain link, starts here, but it soars far beyond its basic roots in double, broken, mixed link, thick and thin and free form sculpted treatments associated with studs and nails in a sleek nod to Punk. With this collection, Creative Director Marta Martino evokes the heady atmosphere of clubbing in a flash of 18K yellow gold on skin glowing with sweat in inventive chains that move to the beat.

“There’s something very straight forward, basic, back to the roots, but powerful about chains,” says Martino. “I was in the mood for a less complex, more direct style.”
Martino found chain inspiration everywhere from Brad Pitt’s Irish Gypsy boxer in Guy Ritchie’s underworld spoof film “Snatch” (2000) to N.W.A., (Niggaz with Attitudes), the iconic Hip Hop group from Compton, South Los Angeles that launched the careers of Dr. Dre and Ice Cube and introduced Gangsta Rap to the world in the mid-1980s. From there she followed the chain and found a multitude of links to diverse contemporary rhythms and cultures running through Jazz, Pop, Punk, Funk, Salsa and Rock‘n’Roll.

The Peruffo signature in this collection is the stud which is smoothed, sculpted and entirely sublimated in micro and macro treatments for earrings and sleek necklace and bracelet closures, or as a ‘texture’ for individual chain links. More common ground shows in the nail, elegantly sculpted and twisted for rings, or in enlarged chain links which break up gourmette bracelets and necklaces and drop earrings like a raw, open medallion lucky charm.
“We have been through a period of stop and restart,” comments Martino. “The chain invokes body heat and 18K yellow gold is the essence of real gold, but it also evokes the desire for flash, and expresses the spontaneous sense of fun, release and freedom that awaits us.”

Emanuela Amato, co-founder and Art Director of Dust, the bi-annual style magazine from Berlin that explores youth culture in continual crisis, shot Peruffo’s Club collection photos and film in Mallorca, Spain. “I thought about what club means today. During the pandemic, young people felt as though they were locked up in a cage and so many of them escaped big cities to live in and enjoy nature,” says Amato.
The film and images focus on two people dancing in the woods wearing Club collection chains; often submerged in water. Amato added colors to the liquid, and eventually “to create texture,” she switched from food coloring to spices. “I love the colors suspended in water it reminds me of the atmosphere at Berghain (Berlin’s celebrated techno temple).” This collection shows a new genderless design style from Peruffo. “I was really surprised,” says Amato, “even the earrings look great on both men and women.” 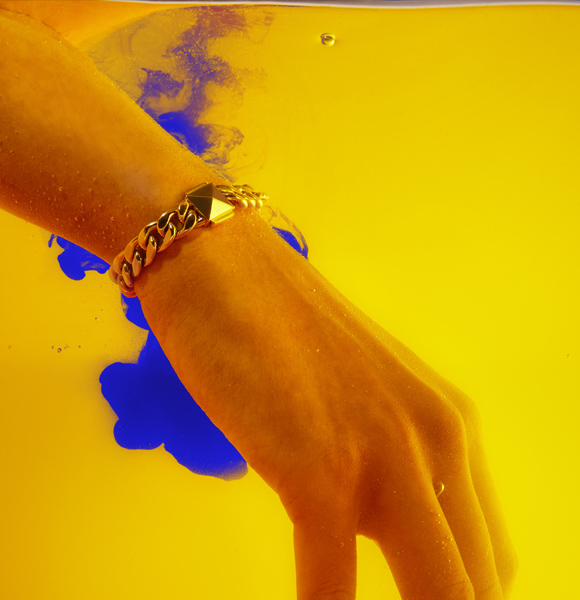 DISCOVER THE PRODUCTS OF THE COLLECTION CLUB LOOKBOOK