Imagine the fingers of a slide guitarist, someone like Muddy Waters, sliding up and down the strings until his guitar wails. The path to inventive design often begins with a metaphor and Peruffo’s “Guitar” collection, the latest installment in a series from Creative Director Marta Martino, translates the slide guitar technique into jewelry constructed in a play of thread-like bands in 18kt gold that slide with a simple touch while forming featherweight arcs, rectangles and squares for necklaces, bracelets, earrings and rings.

Working hand-in-hand with the designer over the past year, Peruffo’s artisans have painstakingly developed a unique, way to execute the fine band design, used previously for the “Slide” and “Ink” installments, all echoing Martino’s sculptural cage constructions, a signature of “The Cage,” her multi-disciplinary practice in fashion, art and design.

Martino’s sketches that surprised and perplexed the Peruffo team at first, became a challenge for the atelier. The result is a state-of-the-art technique for fine jewelry that puts Peruffo in a class by itself. “What interests me in my work with Peruffo is how to create a sense of movement in what is essentially a static object,” says Martino. “I was hesitant at first, but once I began playing with the bands I found a way to inject a kinetic aesthetic in jewelry for a multifaceted result that’s both
simple and complex, solid and porous.”

Martino selected French-Swiss artist Pandora Graessl, to illustrate the “Guitar” collection. Graessl who uses a scan technique in her compositions captured the sense of free falling movement and golden light of Peruffo’s “Guitar” pieces in a series of collage images featuring organic matter, including her own self portrait, surrounded by darkness.
“I turned the chapel in Arles where my first solo show was held this summer into a studio at night to produce these images and a film. My work focuses on the duality, fragility and beauty of life. I’m very interested in matter from earth and plants in decomposition to skin and hair. I believe that through darkness we discover grace and ourselves,” says Graessl of her ongoing project Strange(r) Paradise. 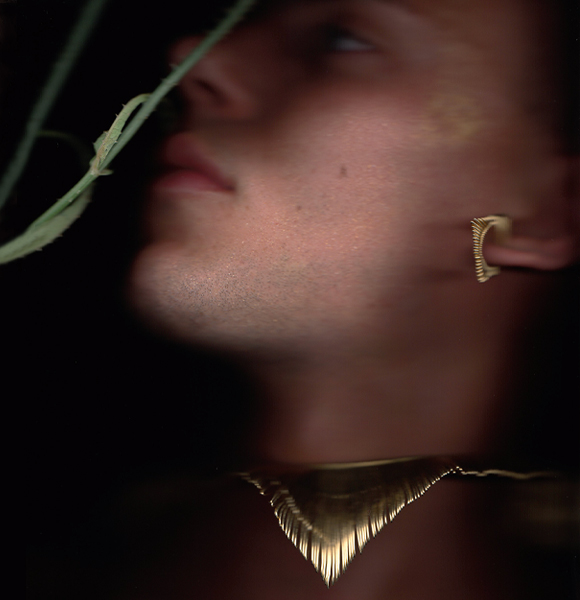 DISCOVER THE PRODUCT OF THE COLLECTION GUITAR LOOKBOOK