“Point and line to plane”, radical text of major artist Wassily Kansindky, sums up the foundations of the new collection conceived by creative director Marta Martino for Peruffo Jewelry: Studs.

The functional element – which already became an iconic decorative mark of the brand – of the small pyramidal stud turns into the unique essence of the collection, in a constant and obsessive repetition of gold and blue agate studs, defining earrings, bracelets, necklaces and rings.

Function becomes aesthetics; the latch turns into a central element that, infinitely reiterated, gets to be the jewel itself.

The pyramid, a perfect geometric shape rising from a set of lines but also a simple succession of points (peaks) is an ancient and modern reminiscence, crossing the ages from antiquity to Punk; being an archetype, its is present in the imaginary of everyone among us and it generates fascinating and sinuous pieces, worked with a tricot-like technique to give softness to its geometric sternness.

Studs as many carré-cut stones, of which the part that is usually hidden is now shown, the pointy tip that is here revealed in its apical perfection. Yellow gold and intense blue agate run after one another, repeating themselves in rigorous as much as winding and intriguing jewels.. 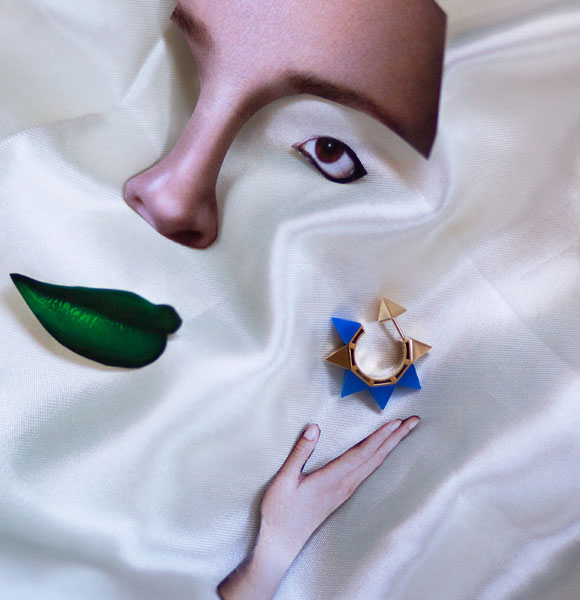 DISCOVER THE PRODUCTS OF THE COLLECTION STUDS LOOKBOOK