2870
post-template-default,single,single-post,postid-2870,single-format-quote,theme-stockholm/stockholm,stockholm-core-2.1,woocommerce-no-js,select-theme-ver-6.9,ajax_fade,page_not_loaded,,qode_menu_,qode-single-product-thumbs-below,wpb-js-composer js-comp-ver-6.4.2,vc_responsive
29 May 2019 In Interviews

— IN CONVERSATION WITH FRANZISKA AIGNER 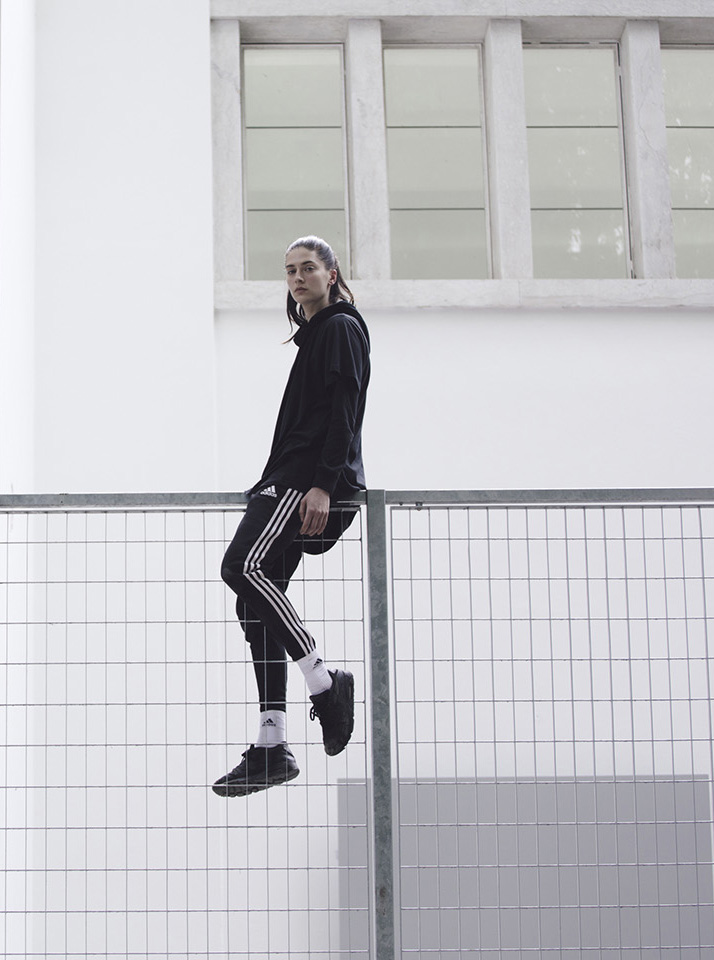 When do you feel you are expressing yourself in the most complete way?

I don’t know if there ever was any one way that I felt captured all aspects of my existence completely. Were that to be the case, would it be possible to let the inside emanate to the outside completely, to let the inside bleed into the world completely, were that gap between the inside and the to be closed, I think desire to express might stop, symbolic life would stop and with it, aesthetic life would stop. I have always had a strong aesthetic life, ever since I can remember. And I believe it to be all the much stronger because of that very difference between my inside and the outside, because of something that I could never completely say, sing, write, or play. I have been making music since I can remember. I trained as a classical cellist for most of my childhood and in early adolescence I played the piano and have been singing for most of my life. I discovered my deep love for the theatre during a 21-hour performance of Goethe’s Faust, staged by Peter Stein, in which the late Bruno Ganz played Faust. I was 14 years old at the time. My mum traveled with me to Vienna to watch it and it is still one of the most memorable weekends of my life. After returning back home and falling asleep dreaming myself into Faust every night, I decided that I want to work in the theatre. So, I started to train as a dancer and choreographer from then on, which is the art form that I eventually studied after high school at P.A.R.T.S., a school for contemporary dance and choreography directed by Anne Teresa De Keersmaeker in Brussels, Belgium.

Which is the most important skill you learned from that Academy period?

I think I used to be quite impatient. I have only recently learned that things have their time, ideas have their time and one does well to respect that time if you want them to become part of what you do. It takes a long time to understand any one thing. Often, things need to rest for a while and shed their first appearance in order to be able to grow into something that’s worth sharing with others. That counts for thoughts as well as aesthetic processes. There’s often only that much you can do with approaching something directly and pushing. It’s only recently that I understood that it might be better to adopt an oblique approach, and be patient. You’ll know when things are ready.

Overturning the rules: if you could, what rule would you like to break up?

I don’t think that our problem, meaning the problem of our time, is stifling rules that need to be transgressed or subverted. Looking at the world around us, I understand that we live in a time in which there is a constant transgression of rules and laws, which are also differently binding for different people, leading to a waning of our investment and growing disinterest in those rules to organize our world. So, from an aesthetic point of view, I don’t think that it is an interesting or adequate aesthetic response to work on transgression right now. But I also don’t think that – in the absence of rules – it is an interesting aesthetic response to self-imposed rules. If only it were that easy.

“I also don’t think that – in the absence of rules – it is an interesting aesthetic response to self-imposed rules. If only it were that easy.” Could you better explain to me this interesting point of view?

The 20th century has been witness to a number of artistic strategies, which were set to work in order to function as limiting and organizing devices for aesthetic processes. I guess it was an attempt to deal with the waning of rules and artistic genres and the vast world of contingent possibilities that opened up in its stead after the historical avant-garde. I am referring to stuff like chance operations or any other procedure, in which a system of conduct is set up and, by sticking to it, generates a sense of necessity. I don’t want to discredit the art that was or is still being generated this way. I guess if it works for you, that’s good. My point is more aimed at the larger phenomenon. It’s like a comforting treatment to finding yourself in an overwhelming and chaotic world. It might help you deal individually and temporarily to make some works, and those works might even turn out to be objects in the proper sense so you might be able to sell them and make some money. But by condemning yourself to carry through what you had once told yourself to do, you’ll have become your own servant in the meantime, and you won’t have dealt with the actual problem, which extends beyond the individual problematic.

A contemporary artist and a designer that you consider significant, and why.

There are a number of artists I feel inspired by. One of them is Paul Thek. There is a certain sensitivity to his work, and the forms it took over time continue to speak to me. I am particularly interested in his performance works, which he realized together with an artist co-op at Documenta 5 in Kassel or Moderna Museet in Stockholm in 1971/72. I feel these performative installations strangely have more to do with what goes on nowadays than back then. I read N.K. Jemisin’s Broken Earth Trilogy last year and was completely blown away by it. It’s a brilliant geological sci-fi work with complex and strong female characters, written from a place of so much love and pain, aligned somewhere between Toni Morrison and Octavia Butler. There are few books that have touched me like this recently.

What do you think about collaborations? There is someone with whom you would like to collaborate?

I have been part of a lot of collaborative projects in the past. I worked together with some close friends under the name New Forms of Life between the years 2012 and 2016. We all came from different backgrounds and found each other by making immersive sci-fi performances together. Apart from that I have worked for the visual artist Anne Imhof for the last six years and even though it’s very much her work, the work is generated by a large studio with up to 20 people working in it. It is sort of a factory scenario in which everyone has their responsibilities and makes a different aspect of the work, the nature of which is quite multi-disciplinary. I enjoy collaborating. There is nothing better than throwing ideas back and forth and finding people who understand you and fuel your ideas so that you can run with them to a place you could have never gotten to on your own. But I also think that the time has come for me to work on my own stuff. Writing my doctorate has taught me that I actually enjoy working on my own quite a lot, and that it is something that I need to do more. So, I’m trying to do more things by myself now, to be able to listen more distinctly to what it is I want to make.

A short-term and a long-term project that you would like to realize.

I have slowly been starting to work on a project on Karl Kraus’ The Last days of Mankind. It is an epic theatre play, which was Kraus’ belated response to the disastrous experience of living through World War I. But differently to other artistic accounts, he wrote a satire about the war, which is furthermore set on Mars, in Marstheatre, meaning that it is also an early work of science-fiction. Composed entirely of found footage like newspaper clippings and advertisements, Kraus composed it as a ten-day play in which the Martians re-perform the fall of humanity, meaning World War I, so as to have a big laugh. I still think it is a unique response to the theme of the end of the world, and singular in the sense that there are a lot of romantic, melancholic works produced at the moment, in which we are sort of hypnotized by the abject beauty of the ruin or the fragment. The Last Days of Mankind has never been performed in its entirety, I feel super intrigued by it and would like to make a ten-day performance of it. It is a huge undertaking, and definitely my most important long-term project. As for a short-term project, I have been working on a song cycle for some months now. I went to Sardinia on the invitation of the Austrian Ministry for Culture for a residency last summer, where I mainly ended up writing songs. I have slowly been building tracks for them and would like to finish this project before the summer this year. It’s very exciting!

I spent the whole month of September in Sardinia last year, working on composing and recording songs that I created while I was under the influence of the beautiful and mysterious island. I had been singing in the last two performances by Anne Imhof (Angst, 2016 and Faust, 2017) and had also written and co-produced the tracks. We had spent the summer 2018 working on producing and recording the songs in order to release them as albums. So, when I arrived in Sardinia, I was still in the middle of all of that music and so continued that process under a new set of influences. I left a sound piece behind in the gallery in Alghero, which is connected to the Austrian Residency.

Franziska Aigner is a PhD candidate in Modern European Philosophy at the CRMEP, Kingston University. Apart from her academic work, she works as an artist and performer within the visual and performing arts as well as a performer for Anne Imhof, Mette Ingvartsen, Alexandra Bachzetsis et al. 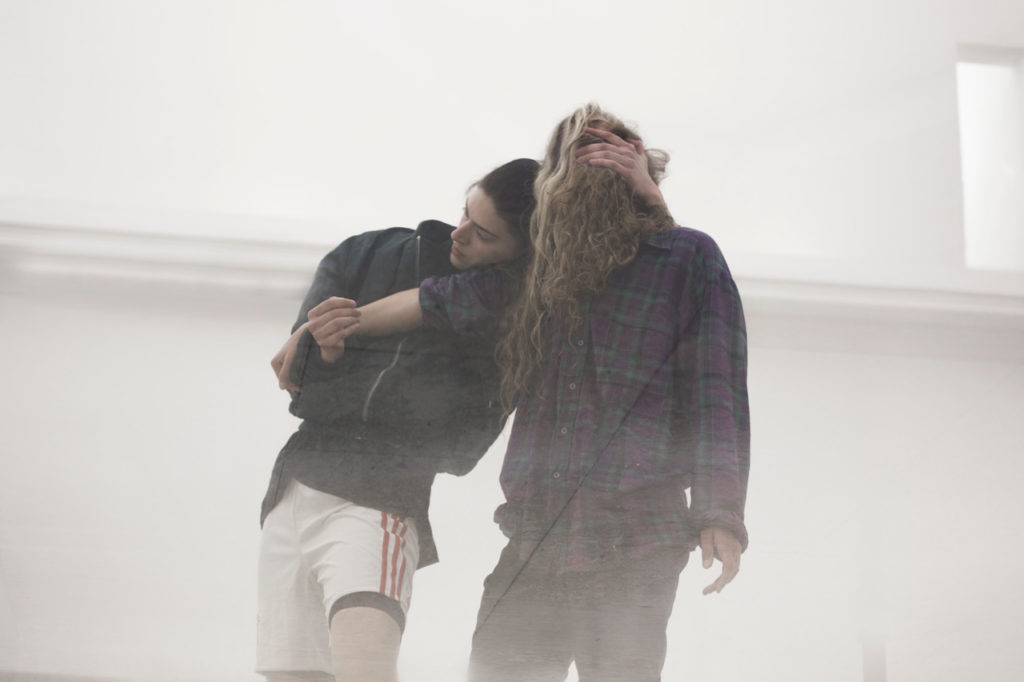 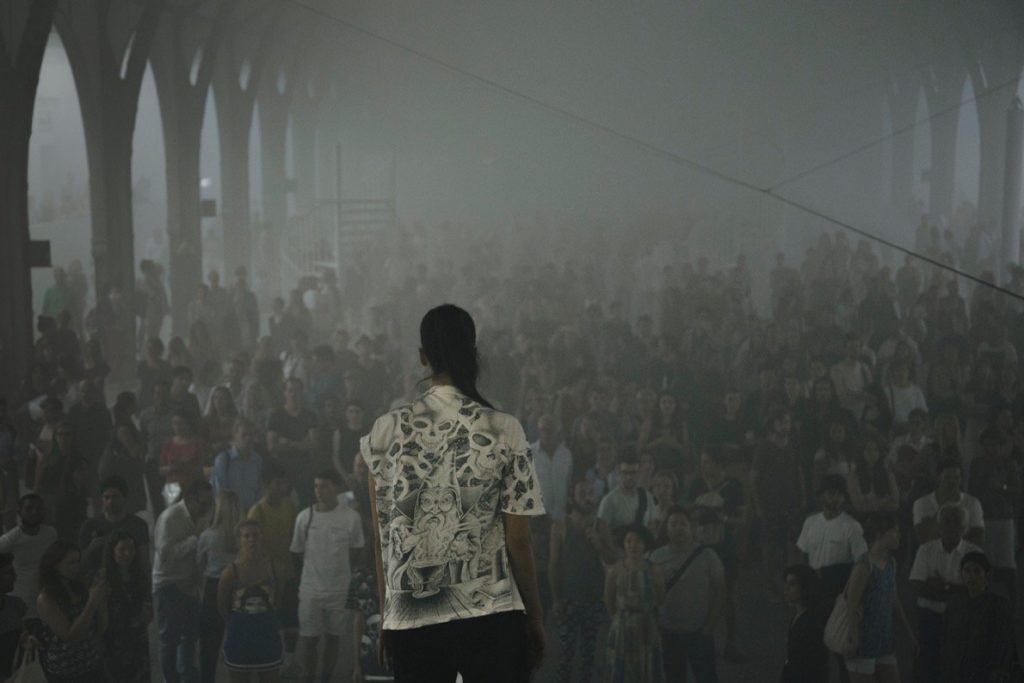